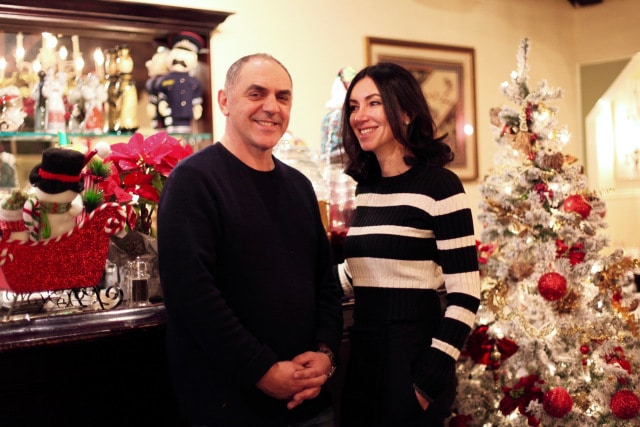 As per tradition, Russians and other natives of the former-Soviet countries ring in the New Year in LA, surrounded by what looks like veritable Christmas symbols to the American eye. Ventura Boulevard offers a taste of it.

As a Jewish girl with Ukrainian roots growing up in Los Angeles, Rina Atroshenko learned fast that she would need to explain the Christmas tree in her family’s home. Their celebration of Novy God, the Russian phrase for New Year, was never the subject of any animosity by her American peers – just ample confusion.

“We would always have to explain ourselves,” said the owner of Russian restaurant Traktir on Ventura Boulevard in Encino. “Like we’re not celebrating Christmas, this is our New Year’s. It’s not religious, just a big celebration of the new year approaching.”

Still today in Los Angeles, home to one of the country’s largest population centers of Russian-speaking immigrants, both Christians and Jews are quick to agree that the richest elements of their culture remain unfamiliar to most Americans. 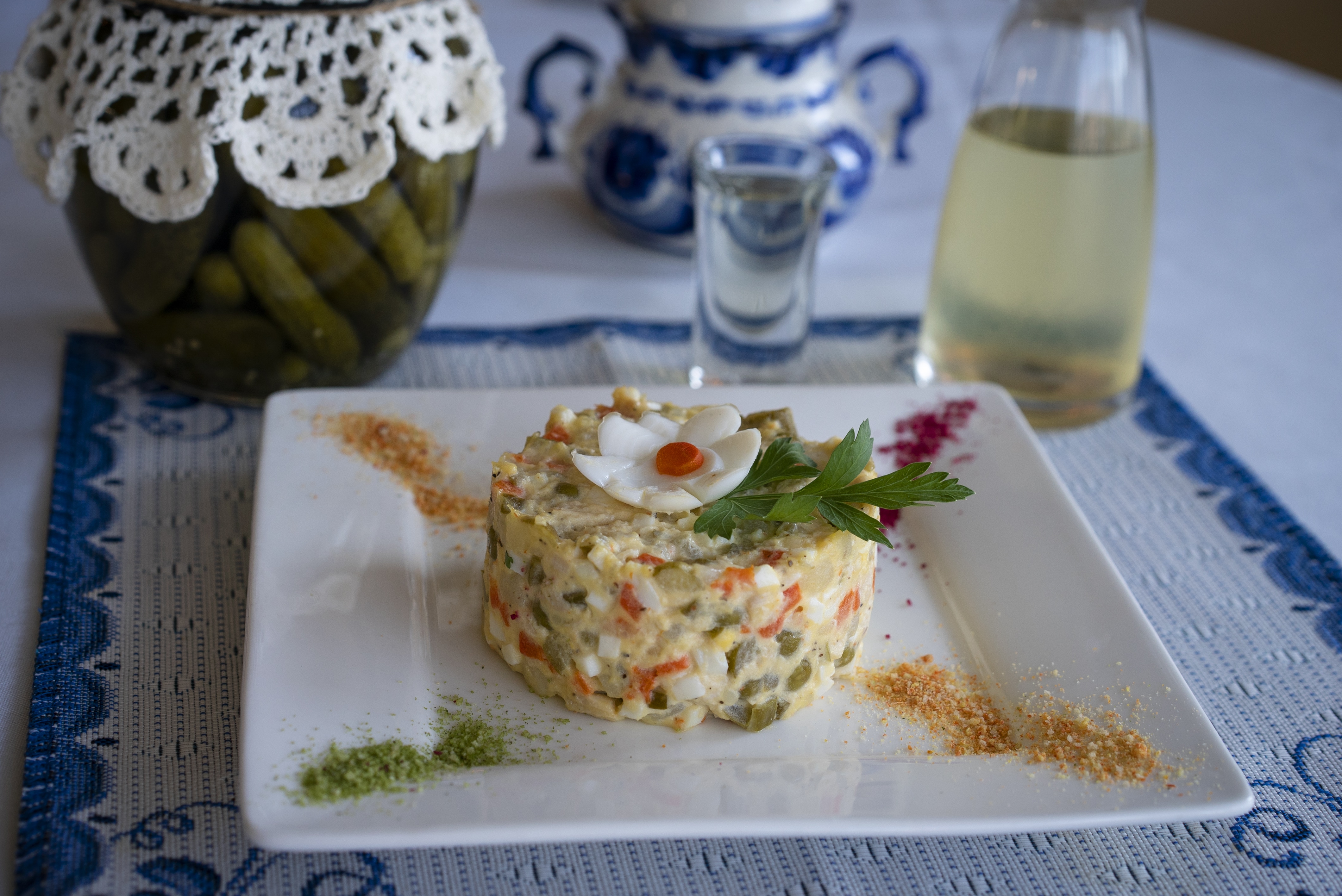 But as most of us hit the night club or watch a giant twinkly ball drop in Times Square, no lack of mainstream understanding is keeping Russian families from celebrating the fullness of Novy God – especially in the San Fernando Valley, a part of LA that has seen a significant jump in Russian-speaking residents in the past decade.

As per Novy God tradition, Russians and other natives of former-Soviet countries ring in the New Year surrounded by what looks like veritable Christmas symbols to the American eye: a decorated evergreen tree in the living room, twinkly lights, tinsel, an often blue-coated Santa Claus figure called Ded Moroz and the exchange of gifts. There’s even a snow maiden called Snegurochka.

Yet the holiday considered by many of its adherents to be the most important of the year is decidedly secular, in part because of the strict restrictions placed on practicing religion under the former Soviet Union. To further complicate things, Christmas for many Russian-speaking Orthodox Christians in the U.S. doesn’t arrive until the first week of January. 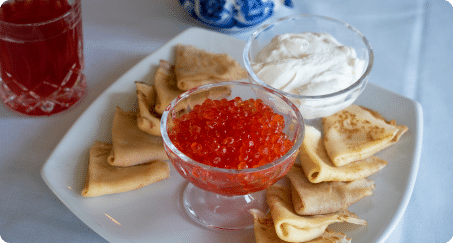 But it’s the standard at Traktir, where Atroshenko and her co-owner husband Oleg were hosting families for their New Year’s Eve meal along white tables covered in colorful salads, the homey dining room filled with the intermittent sound of toasts being made for health, wealth and happiness in the coming year.

Perhaps the most essential element of Novy God is family, followed by food as a close second. The extended feast, measured by how much of the table cloth is covered in dishes, begins with appetizers like “shuba” salad layered with herring, potatoes, carrots and eggs, or “olivier” salad and “pelmeni” meat dumplings.

Desserts like napoleon cake and homemade preserves follow helpings of borscht soup, plenty of meat and whole cooked fish. Indispensable, of course, is the champagne and copious amounts vodka. Traktir’s bar is lined with barrels of vodka infused with the likes of lemon mint, horseradish, cranberry and garlic pepper to name a few. 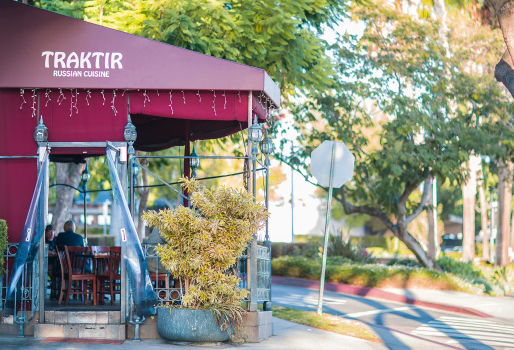 In the 1970s and 80s, mostly Jewish Russian-speaking expats who fled anti-Semitism made West Hollywood’s Fairfax Avenue, Santa Monica Boulevard and surrounding area their home. Others came to the region during the breakup of the Soviet Union in the late 1980s.

But in the early 2000s, many members of the younger Russian-speaking generation began migrating to other parts of the city, including the SFV, for more competitively priced housing. And with the move of its loyal clients, Traktir followed. 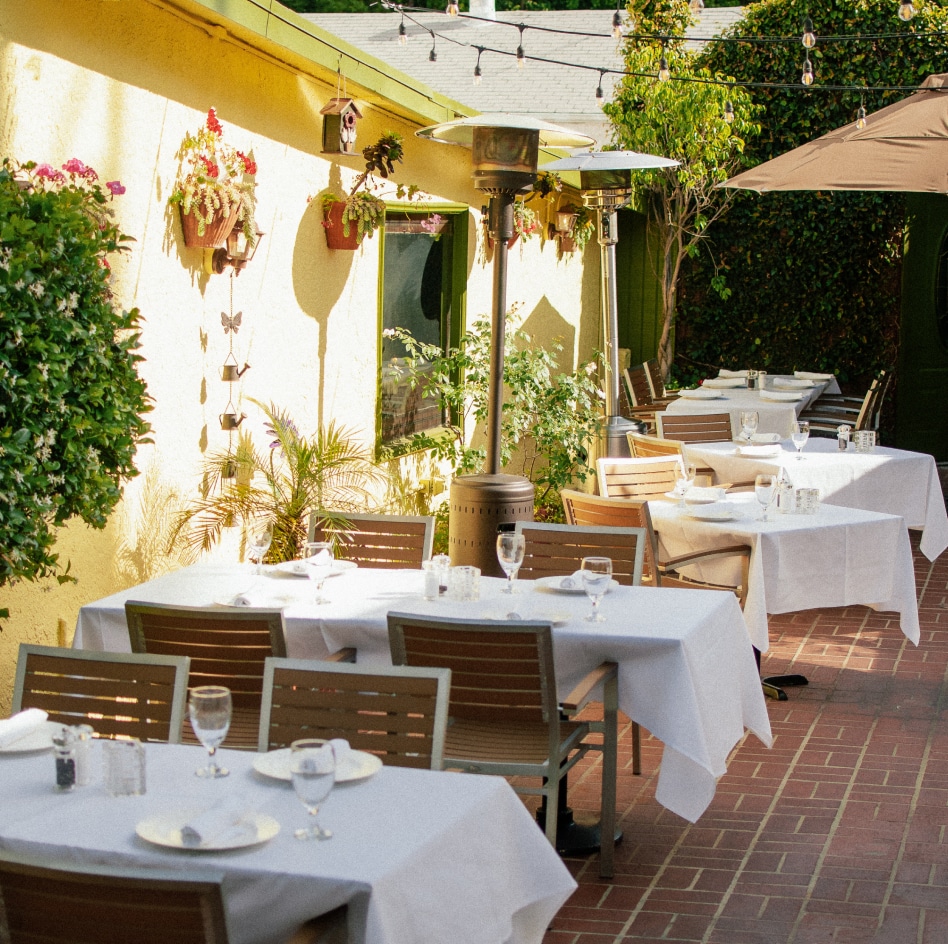 “Everyone in West Hollywood spread out, and a lot of the Russian community now is out here in Encino, Tarzana, Woodland Hills, Calabasas even and West Hills. So we were actually approached by people saying, ‘Oh you guys have to open something in the Valley’.”

While there’s no definitive population count of Russian Americans in Los Angeles, some estimate a whopping 600,000 live in Southern California. A Jewish non-profit professional who works with young Russians estimated that just Russian Jewish Angelenos make up around 80,000 people.